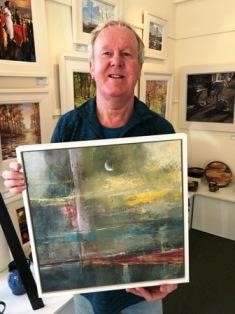 About the artist: Based in Dorset, John Walker’s work is well known for its expressive use of colour and light to create atmospheric landscapes. Having worked mainly in the home counties, but also extensively across Spain and France, John has a natural understanding of landscape. His work naturally evolves from a personal response to the mood and atmosphere of a place, scene, or even just to a feeling. Though his work is semi-abstract in style, he hopes his paintings encourage a dialogue with the viewer which stimulates an individual interpretation of the subject matter. Using a mixture of oil paints and mixed media, John uses a range of collage and palette knife techniques.
With an immense desire to create, John has undertaken courses in the production of Stained Glass at Richmond College and Goddard and Gibbs Limited in London. However, it was his friendship in the early 1980s with artist Joan Workman, wife of the President of United Artists Harold Workman, that really inspired him to paint. After being taught oil painting by Joan, John actively started to sell and exhibit his paintings from 1986 whilst in France.
SUCCESS
Since the 80’s John’s work has been regularly included in exhibitions across the south of England. He has shown in numerous art fairs across the UK and has previously been short-listed for the RA Summer Exhibition. As well as being a painter, John is also an accomplished photographer, and he was a winner in the Sunday Telegraph Photographic Millennium Exhibition and the T-Ark Centre Exhibition in Oxford.