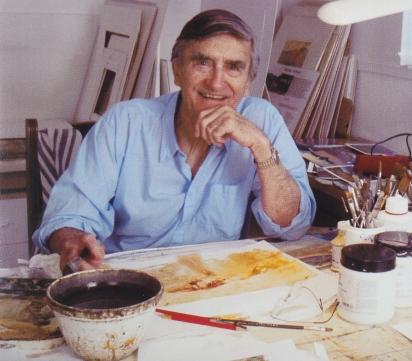 About the artist: A retrospective collection of the works of the late Michael Morgan RI (1928 – 2014)
This exhibition has drawn together over forty fine works by the late Dr Michael Morgan RI which reflect the evolution of his approach to interpreting landscape from the late 1980s through to his last solo show held at Marine House in 2012.
Michael breathed new life and vigour into the watercolour medium. He was awarded the medal for the most outstanding work by a non-member at the annual RI exhibition in London in 1998 and in 2001 was elected to this small, prestigious body of artists.
Michael Morgan had the rare privilege of creating two distinguished careers for himself. Firstly in academia, initially in teaching, becoming Headmaster of Dartington Primary School in Devon and progressing to his role as principal and CEO of the Froebel Institute, (now the University of Roehampton). He retired from this role in 1985, but remained on boards of academic institutions in London and the USA.
He moved back to Devon and turned his attention to painting, which had always been a hobby. He became a founding academician of the South West Academy of Fine and Applied Arts in Exeter and chaired its board of trustees. He was President of the Honiton Arts Society and the new arts block at the senior school in Axminster, his local town, was named in his honour after him.