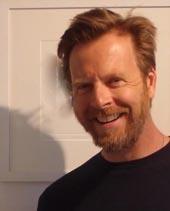 About the artist: Nigel studied Textile Design at the University of Brighton. Since leaving college in the late 80's, Nigel has worked across several design fields both here in the UK and internationally in New York and Southern Africa. While his formal artistic education took place in Brighton he puts his real education down to, ''being dragged round the galleries of West Penwith in Cornwall as a small boy by my father and introduced to work by Alfred Wallis and Ben Nicholson.''

Though Nigel paints semi-abstracts, there is a strong figurative read to his work. He abstracts from a source, such as a landscape, a harbour, boats, a still life, or a nude by removing some of the conventions of representation.

Over recent years Nigel has had great success exhibiting with Marine House at the various Affordable Art Fairs in London, Singapore and Hong Kong. He will also be holding his second joint show here at Marine House later in the year.

The Fox on the Beach

Still Life with Carafe and Mackerel

Still Life with Mackerel and Jug